Share:
Report
Jul 11, 2018
The 2017 edition of the Commonwealth Fund Scorecard on State Health System Performance finds that nearly all state health systems improved on a broad array of health indicators between 2013 and 2015. During this period, which coincides with implementation of the Affordable Care Act’s major coverage expansions, uninsured rates dropped and more people were able to access needed care, particularly those in states that expanded their Medicaid programs. On a less positive note, between 2011–12 and 2013–14, premature death rates rose slightly following a long decline. The Scorecard points to a constant give-and-take in efforts to improve health and health care, reminding us that there is still more to be done. 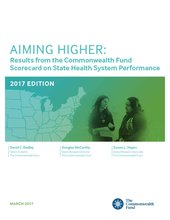